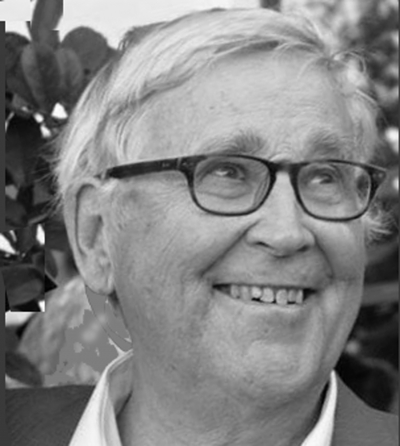 Bruce Dunn was born and spent most of his childhood in Larchmont N.Y. His first hobby was reading. When he was reading a book he really liked, he would tell his mother that he was sick. She would look at the book and if it met her requirements for good reading, she would agree he was sick. If not, she would take his temperature. Bruce really thought he had her conned. All he had to do as read a good book and he'd be allowed to miss school. His second hobby was writing long stories about knights of the King-Arthur variety.
At fourteen, he went away to school at Mt. Hermon in Massachusetts. He loved it and for the first time participated in sports. From there, he went to Northwestern, near Chicago. He started in journalism, but switched to psychology. While at Northwestern, he developed a fascination for statistics and research design. In the summers, he spent time at his parent's summer home just north of Keene, NH—relevant to the novel. After he graduated, he worked in an actuarial department for six months before going to graduate school at the University of Wisconsin. There he married Kitty Dubielzig, a student working in the genetics lab of Nobel-Prize winner Josh Lederberg. They lived in a small apartment over a pizza restaurant, where they often used their water pistols to drive away noisy loiterers in front of the restaurant.
Bruce knew before he graduated that he wanted to teach and do research at a university level. He earned a Ph.D. from the University of Wisconsin in experimental psychology with a minor in mathematical statistics. His first job was at Marshal University in Huntington, West Virginia. There he and Kitty discovered spelunking. There was ample opportunity in West Virginia and nearby Kentucky.
He went from Marshal to the University of Minnesota-Morris. There he taught, did research, and lived on a farm for two years before moving to the University of Calgary in Canada. He spent the rest of his career there until retirement. While there, he taught and published in the area of pure and applied sensory perception, and in research design. For two years, he was president of the Canadian Acoustical Association. Since retiring, he has had time to pursue his interests in anthropology, genetics, particle physics, and number theory. Just as important, now h has time to return to writing fiction again, but not anymore writing about knights, but rather writing science fiction.

195000 years ago, the Tovazi, chosen of God, faced a challenger.
The Tovazi decided they needed greater speed in space to maintain their supremacy. Since they could not remain conscious during near light speed, they opted to enhance one of the intellectually handicapped that could and then use them as pilots. To that end, they decided to employ eager scientists who had a chance of succeeding.
Jeevra, along with biologists, and geneticists was sent to the third planet around a middle-sized star. Jeevra and the team worked brilliantly to reach the, and the near impossibility of defining, much less achieving, enhancement.
As they realized they might succeed, Jeevra and many of the scientists came to have misgivings about the governments plan to enslave enhanced aboriginals.