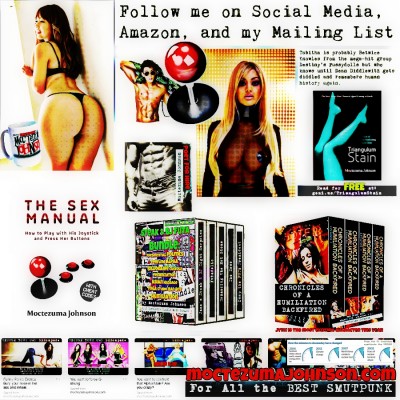 SMUTPUNK is my middle name


Choose Your Own Kink SEXcapade: The anti-Romantic Story That You Decide

Instructions: Just go ahead and read but remember to decide what to do next in this interactive eBook for smutpunkists and others who enjoy a good action adventure with religious girlfriends, rivals, gunge, and fairy-tale queens.

You know that with Moctezuma Johnson your getting your mind bent and your pulse quickened. This book does not fall short.


Chronicles of a Humiliation Backfired - Season One

Jynx is on the loose. She was slighted by her boyfriend who has fallen for a smoking hot, South Korean supermodel and leaves Jynx alone and humiliated. Now she wants this man so badly she literally keeps drops of him in secret places. She will do anything to keep him. Anything. Unfortunately, he wants to get as far from her as possible thanks to her knife-wielding shenanigans.

Jynx is willing to risk life and limb to get him back. The thing is, she's not risking her own life and limb. Will sultry and psychotic Jynx be able to get everything that she wants? Or is she crossing a line from which there's no turning back. Everybody's safety--psychological, emotional, and physical--is at stake.

"Heav'n has no rage like love to hatred turn'd / Nor Hell a fury, like a woman scorn'd"

Pop and Lollie get separated and find themselves trying desperately to get back to where they each belong. Unfortunately, they each have their own major obstacles to ever reuniting. Both are lollipops and are utterly at the whims of the people in whose hands they rest. Will they get sucked into nothingness or will they make it back to their rightful place in the universe? This smutpunk plot will swirl you like a candy crushed lollipop sugary sweet saga. So buckle up and let Moctezuma Johnson blaze you into hyperdrive. You will cross the universe with the SMUTPUNK crew and the Five Hive in an attempt to get Pop and Lollie home. Like usual in the Tri Stain Universe, it all rests on sex and orgasm. So, dip your stick in chocolate and let's get to sucking those sugary sticks.


Attack of the North Korean Giantess

A nuclear meltdown has occurred in North Korea. Radiation kills the men but zaps the women relegated to being secretaries in Tower Number 1. These woman turn into Giantesses. They have been put down by the patriarchy for years. Now it's time for revenge. They take to the Capital to DESTROY. Like most sexy paranormal events, the Five Hive (highly-trained, latex-clad Women-in-Black agents) come to save the day. Mi Hee, the Korean Five Hive agent, must confront a very disturbing past if she want to help before the Giantesses destroy everything on Earth. Will she be able to help?

The world’s first ever anthology of smutpunk erotica collects six sexy stories from half a dozen twisted authors and slaps them into your hot little hands, absolutely free!

• (Not Quite) Milked by the Yeti by Callie Press: Brendalee Elkins finds that some nekkid pictures of her hawt body have been leakin' all over the internets. She come right to get them and restore her honor but a Yeti gets in her way.