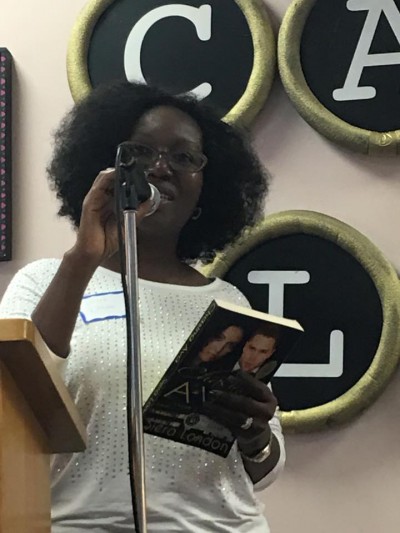 Siera London, a former naval officer, is a #1 Amazon Bestselling Author of contemporary romance and romantic suspense. A native Floridian, her love of coastal towns and bustling cities shines through in her sassy and sexy storytelling.
Currently, she resides in Southeast Florida with her husband and a color patch tabby named Frie.
She can be found online at www.sieralondon.com.

She eff'd everything up. The wedding. His life. And, he wants…her back.

Truxton Jacobs
Even after being left at the altar, he still craves her. Some call him whipped, but he doesn’t care. He still wants her.

Tynisha “Ty” Hain
She ruined her life…and his. The ache to touch him burns deep. If she surrenders, how can she stop her body from giving up more than she has to offer?

One proposition. One night. Once will never be enough.

Dr. Graham Hamilton is ready to make his part-time lover a permanent addition in his life. Problem is, she isn’t returning his calls.

Doctoral student, Shayla Walters, wanted more than Graham’s routine visits to her bed. She would have given him forever, but life threw a curve ball that has her rethinking her choices.

When Graham arrives on the university campus, Shayla is resistant to their usual arrangement. Blindsided by her rejection, he rises to the challenge. He came to the nation’s capital for Shayla, and he’s not leaving without her.

*This is a Bachelor of Shell Cove Crossover Novella*

Enemies at birth. Soulmates at first touch.
Cindra is running hot. A trait that renders a Nepherian female ineligible for a mate pairing.
Celso, revered ice warrior and protector of the Kelvinian people, needs to take a mate before he can ascend to the throne. Problem is…no female within the realm can withstand his chilling touch.
When Cindra is captured by an ice brute with a soothing touch and scorching kisses, she’s tempted. After a lifetime of longing for physical contact, how will two enemies who’ve found solace in each other’s arms protect their love without igniting a war between their worlds?

A killer’s last move. A detective’s last chance.
San Diego detective MaKenzie Young never surrenders...under any circumstance. She's spent years hunting the Birthday Butcher, a sadist who murders and decorates one young woman every year.
But this year...the psychopath changes their game.
It's been forty-eight hours since the latest victim was discovered when someone close to Mac goes missing. And this time...the killer makes a demand she can't refuse. With the clock ticking and a life at stake, how will Mac find a way to catch a killer before she has to concede defeat?

Dallas Fire & Rescue firefighter, Kendall Raine goes out of her way to avoid male attention. Unfortunately for Kendall, her hot as sin teammate threatens her focus and stokes an internal fire she thought long extinguished.

Firefighter and former Marine, Cutler Stevens sees beyond Kendall’s disguise the moment he lays eyes on her. As a former Marine, his fighting days are behind him, but gut instinct tells him this woman could use a champion on her side.

When Kendall's past follows her to the southernmost point of the United States, they are both tested. How close to the fire will they go for love?

Waitress, Symphony Porter’s obsession with fire has made her a target for distrust and rejection. The last thing she needs is a handsome investigator hot on her trail.

Fire investigator, Nathan Zachary has had enough relationships crash and burn, that he knows at first sight that Symphony is the woman for him. He’s ready to make the saucy waitress a permanent part of his life, but a series of random fires puts Symphony on a collision course with Nathan’s case.