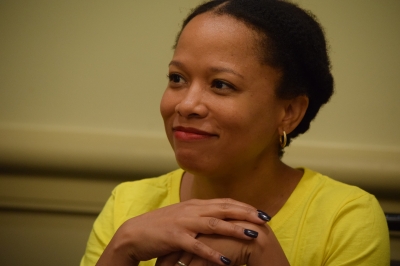 Holley Trent is an award-winning, best-selling author of contemporary and paranormal romance. Her books mix humor and heat and spin current events with mythologies from cultures of all sorts.

She's a Southern girl at heart, but currently lives on the Colorado Front Range with her husband, two kids, and two cats.

Eileen Conroy has always embraced the concepts of DIY and self-help. As an acclaimed member of the Jekhan Service Corps, she’s well-known for her get-it-done demeanor and no-nonsense communication style. There isn’t a challenge she isn’t willing to take on, except one.

The honeymoon phase is always so dreamy, but what happens a year after the fireworks dim?

Have babies, work-from-home struggles, and tight living quarters put a damper on Lisa, Finch, and Joey’s passionate romantic arrangement? Or are they finding that time has only made their intensity sweeter?


This is a Plot Twist series bonus holiday story set around eighteen months after the end of Working Title. It can be read as a stand-alone vignette but will spoil the plot of the previous book if read out of order as it revisits characters from the earlier story.

If Saul Ade doesn’t accept the mate she has chosen for him by the rise of the next blood moon, the Sídhe will become human. Unfortunately, the woman he must make his love is a mermaid who once tried to drown his sister’s human best friend. If he’d wanted a mate at all, reckless Laurel O’Cuilinn wouldn’t be it.

Laurel’s devastated to learn that Saul would rather cede Allendra’s challenge than to be with her, but she’s too practical to sulk. Four weeks isn’t much time to make Saul cast aside his grudges, and she’ll do what she must to help the Sídhe retain their magic—even if it means turning on some of the mermaid charm her fated mate finds so repugnant.