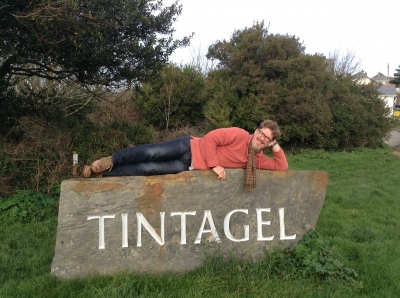 Ian has been a fan of reading since childhood whilst sharing his bedroom with elves, orcs, and the occassinal troll although they were banished early on due to their questionable bathroom habits.
Writing didn't arrive at his finger tips until much later. His first attempt in the late nineties was discarded along with the old computer after his manuscript was stolen by a hobgoblin from it's secret hiding place in the sock draw.
It wasn't until 2010 with the global rise of fantasy based movies that Ian rediscovered that desire to write.
And so 'Toby Fisher and the Arc Light' was born; inspired by everything that is fantasy from King Arthur and Merlin to Tolkien and Harry Potter - a Pandora's Box of fantasy.
It was an opportunity to lose himself into a world of imagination whilst his other world of mortgages, taxes, and work continued to grind forward.
He promises himself that one day he will live entirely in the world of fantasy spinning fantastical stories for the pleasure of others.

Toby is excited to meet his best friend at the top of a famous London monument. But the gathering of ghosts they are watching is blown apart. And the young teenager flees from a creature with terrible red eyes. His flight carries him to the infamous Westminster catacombs where he discovers that without vital clues that reveal the creature's vengeful intentions, he will die?
In a magical world filled with talking animals, a despicable hag with an appetite for teenage boys, a ghost with revenge on its mind and a battle between sea creatures that had once been a figment of his imagination, Toby finds he is running out of time.
Will the ghost prove to be his downfall?
Read The Ghost's Revenge and Discover Toby's fate.