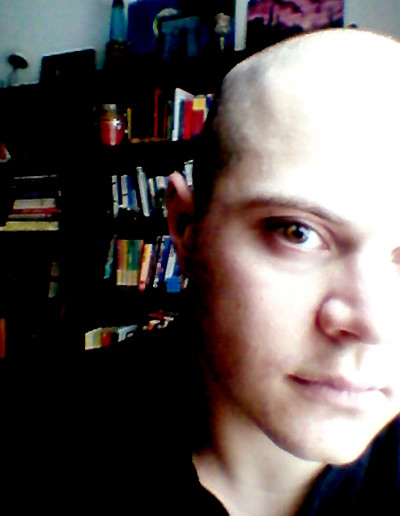 James writes gritty LGBT-inclusive, dark fantasy and science fiction. Before his illustrious fiction career, he was the former Contributing Editor for the Australian Journal of Dementia Care and also worked for Alzheimer’s Australia.
He currently lives in Seattle with his lovely wife and a small zoo, and he is emphatically a cat person.

Before being conscripted to fight in the Total War, Hector Park had a shattered family, a collection of old videogames, and a promising career as a motorcycle stuntman. Now he’s a soldier dying from HEX, a virus threatening humanity with extinction.

When his brother contacts him after years of hostile silence, Hector deserts the Army to spend his remaining days with him to make amends. But Hector’s brother has something even more unbelievable than reconciliation: he offers Hector the chance to join the beta-testing team in Archemi, a full-immersion fantasy VR-RPG world, and help the Ryuko New Reality Corporation give the dying a second chance at an eternal virtual life.

A fractured community. Bodies full of shattered glass. A broken mage, stripped of his power.

While Alexi Sokolsky is hiding on the streets from the Russian Mafia, twenty supernaturally-gifted children are kidnapped from a foster home. Their adoptive parents, leaders in New York’s shapeshifter community, are brutally murdered by someone – or something – with incredible magical and physical power. Frustrated by weeks of botched Government investigation, the werecreatures of New York City are searching for an Occult expert capable of doing the dirty work the police cannot. Someone like Alexi: currently ex-magus, hitman, and reluctant finder of lost children.

A chance meeting results in Alexi joining forces with the shapeshifters against a mutual enemy, but street justice is rarely as

When shit gets too weird for the Mob to handle, hitmage Alexi Sokolsky is the guy they call to fix it.

1986, New York City. The Russian Mafiya is neck-deep in a Wall Street heist worth millions, but things heat up when a mage from a rival gang is hired to force the Russians to back down from the deal. As the magic flies and men burn, Alexi must hunt the murderer in a feverish game of cat-and-mouse to protect his friends. But to honor his contract, Alexi must also save his most hated enemy.
His father.

Set 5 years before Blood Hound, Burn Artist is a prequel to the series which reveals more about Alexi’s past. What were the events that shaped him? Why did he murder his own father? And what are his true feelings for his best friend?