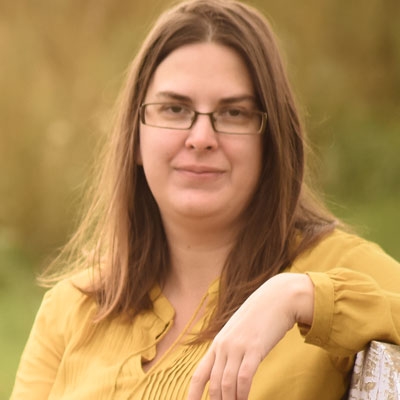 Amber was convinced that her childhood home was haunted. Distorted visages made their presence known to those who dared stare into the hallway. In the basement, the voice of an elderly man sowed confusion and discord. These experiences and more left a lasting impression and affected how she crafts the unsettling elements of her stories.

Drawing on her occult heritage to combat her fears, it was only natural that she'd fall in love with fantasy stories that focused on magic and all-powerful beings to thwart the darkest of evils. But magic solutions don't solve worldly problems…

Using the subtleties of human behavior to craft her demons, rituals, and magic systems, Amber is a lover of modern sorcery, psychological character portrayals, epic battles between good and evil and the huge grey area that separates them.

All Beta releases have bugs – but in this program, they’ll try to kill you.

Academy All-Star Seth Wright was already less-than-enthusiastic about his role in the annual school play, broadcast nationwide in thrilling Virtual Reality – and that was before he discovered there was a glitch in the program hungry for his blood.

Now, Seth and the rest of the cast are trapped in a hyper-realistic swords-and-sorcery adventure – one that’s so realistic, the digital dogs, dragons, and dark wizards can kill you for real; faster than you can say “Game Over.”

With time running out, and the murderous glitch sending ever-more deadly enemies his way, Seth must reluctantly step into the role of hero and leader – and learn an important lesson if he’s to have any hope of saving his friends.

To secure his granddaughter’s future, he must return and face the nightmare of his past.
Dezmond Daamon never wanted to return to Daamon Manor – where a creature of fear and anguish devoured his wife and brother – but now duty demands it of him. It’s the only place he knows to keep his granddaughter safe from the demons that now plague the earth – and the only place he can prepare her to fight them.

But while state-of-the-art technology can keep the roaming demons out of the crumbling manor, there’s just one problem – it’ll also trap any abominations lurking there inside.

Abominations like the living Nightmare that robbed Dezmond of his wife.

Now, the venerable wizard finds himself stalked by a creature that conjures up fear and tragedy to devour its prey.